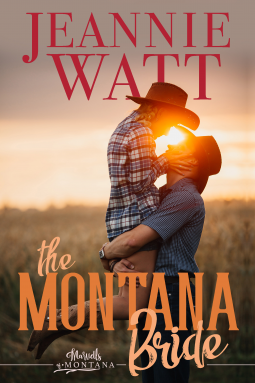 After a decade away, Jacie Rose has returned with her daughter to Sweetheart to renovate a historic hotel…and to lay some ghosts to rest. She knows she’ll have to confront mistakes she made in the past, but she didn’t expect to be living right next door to the guy she once asked to be her husband.

When Brett Starr was approached ten years ago by Jacie Rose with the wild scheme of marrying her to help her out of a jam, his white knight instincts kicked in and he agreed to be her emergency groom. The only problem was that the bride didn’t show up for the wedding. How’s he supposed to get used to seeing the woman he’s never forgotten every day now that she’s his neighbor?

Titles in this series include:  The Montana Bride – The Christmas Secret – Catch Me, Cowboy

Things happen in the publishing world that I, as a reader, have no clue as to why.  I only know (see) the end result.  So, I’m going to admit to being somewhat confused about The Montana Bride.  This book with a title change, one family’s last name and the name of the small town were different in The Secret Bride, which was published on September 15, 2015… otherwise, this is the exact same story.  I know there must be a good reason, one that from my end, makes this confusing.  Knowing all that, I’m going to republish my original review for The Secret Bride… because it’s the same book… an excellent story that for some reason got a few cosmetic changes made to it.

Sometimes the choices we make for the good of the ones we love turn out to be the worst decisions for ourselves. Jacie didn’t want her daughter, Darby, to ever feel that her mom wasn’t in her corner first and always. Not like her own mother who had taken Jacie’s stepfather’s side always even when his actions were abusive or just simply wrong. She would never, ever give a man the chance to do to her daughter what had been done to her.

The trouble with that kind of logic is that you also miss out on the awesome things that letting another person be a part of your life could bring. It’s going to take Jacie a while to see that. Maybe once some of her own ghosts are laid to rest. Perhaps with the help of a horse crazy nine year old who sees all too clearly what her mom wants but is afraid to reach out for. And just possibly with the security of the man who loves her and has always had her back Jacie can make that commitment.

Brett has always been attracted to Jacie. So when she’d asked him to marry her in order to keep her from even more trouble from her stepfather he hadn’t hesitated. Unfortunately, he’d never had the chance to see if they might have made their unexpected marriage work since Jacie never showed up at the courthouse on their wedding day. Now here she was, back in Cherry Lake and looking even more tempting and being even more stubborn. The spark was still there between them. If only Jacie could see that Brett would protect Darby from hurt and harm as much, if not even more so than he would Jacie.

The Secret Bride is a lovely story, one of those happy and sad ones, where what could have been almost messes up what should have been. With drama caused by Jacie’s former stepfather and his minions at her new position – and with Jacie blocking just about every advancement that Brett makes, well it’s going to be a long hot summer as these two figure out that the past is just that. And the future could be theirs if they take the risk.

I enjoyed The Montana Bride very much. And I’m hoping that there will be many more stories from   Sweetheart in the future. It happened in Marietta, so why not here. *hopeful grin* I would recommend this one for any romance reader who enjoys a really good love story, with family and heritage at the forefront and a happy ever after.

*I received an e-ARC of The Montana Bride from the publisher and NetGalley in exchange for an honest review. That does not change what I think of this novel.*