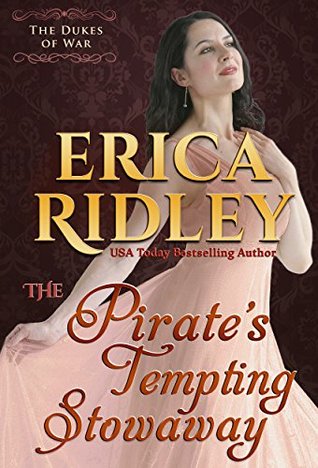 It was supposed to be easy money, easy delivery.  Make the voyage to America, pick up an aging mother, return her to her daughter and her new titled husband and quickly move on to the next adventure.  Hmm.. easy, except when it wasn’t.

Captain Blackheart aka Gregory Steele expected to be transporting a very sick older woman back to England.  What he did not expect was to be greeted by a loaded gun nor the beautiful,, lively and quite feisty Clara Halton.  During the voyage back to England the Captain and Clara got to know each other and each realizes that they are quite attracted to one another.  Yet, if Gregory has one true love it is the sea and he cannot imagine giving that love up for anyone – not even the enticing Clara.

As Clara settles down with her daughter and her new circumstances, the Captain heads back out to sea.  Perhaps with one woman on his mind more than he ever thought possible.  When Clara happens to be in town as his ship sails into dock once again, she makes a rash decision to go and board his ship.  She didn’t expect to become a stowaway but then fate often has plans for us we never would have dreamed of.

I adored The Pirate’s Tempting Stowaway for several reasons.  It is an engaging, complex and entertaining addition to The Dukes of War series.  I’m not the least bit surprised by that.  It also gave us a chance to connect with characters from the earlier stories since Clara is Grace’s mother.  I always love seeing past main characters further along in their lives together.  But what I absolutely adored was the portrayal of Clara as a 40 something widow – as a beautiful, sexy, lively, feisty and thoroughly enjoyable character.  Think about that for a moment – most mothers in Historical Romance, mothers of main characters old enough to be married themselves are rarely given the spotlight of their own romance.  Usually they are sent off to the Dowager Houses to either make trouble for the couple or dote on their many grandchildren.  In our modern world, 40 something couples are common and do the most amazing adventures together… not so much in Regency England.  Then at that age most women and some men’s lives would be pretty much considered done with.  So yes, to see a mature couple in a sexy, loving relationship was a very strong enjoyment for me in this latest installment of the series.

If you love Historical Romance then The Pirate’s Tempting Stowaway is one story that you’ll want to pick up.  It is the 6th story in the series – I would say you could read this without knowing the rest of the series, but like all additions to an established series it is better overall if read in order.

*I received an e-ARC of The Pirate’s Tempting Stowaway from the publisher and NetGalley in exchange for an honest review. That does not change what I think of this novel.*