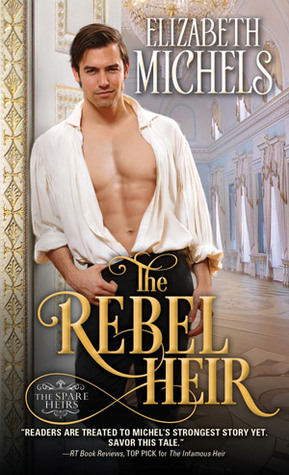 Lady Evangeline Green is living a lie. To please her family, she masquerades as the perfect debutant…until she meets the wickedly charming Lord Crosby. With him, there are no rules. She’s finally free to do as she desires—but freedom comes with a price, and Lord Crosby is not what he seems…

Ash is not Lord Crosby. He’s a con artist, a noble Spare Heir living off his silver tongue. When the Green family ruined his, he swore he’d make them pay, and he never doubted his devotion to revenge…until he met Evangeline. Now, caught in a web of lies, torn between duty and desire, what’s a con to do but deceive all of London and steal the one lady who dared match wits with the devil himself?

Titles in this series include:  The Infamous Heir, The Rebel Heir

Read on for my thoughts on The Rebel Heir.  No true spoilers, promise.

I enjoyed The Rebel Heir so very much.  I mean just look at that cover, if that isn’t a noble arrogance pose I don’t know what is.

Ash is such a charming con man.  And, in the end, his cause is worthy.  His way at going about revenge may be a bit different, but his family had been devastated by the actions of the Green family.  After all, revenge is indeed a dish best served cold and when no one is looking.  Yet to get his revenge he must involve Evie… and that he is having a very difficult time coming to terms with.  He may have to put together another plan for Evie has already been hurt enough by her family.

Evie has been browbeaten into being the perfect innocent lady by her mother’s actions.  One summer that she was never allowed to forget brought about all the disdain, and even hatred for her daughter out, but mostly to Evie’s eyes only.  Her  mother would not dare to do much out in the open, but behind the safety of walls and their residence… she was a most horrid mother and woman.  Not only emotional abuse, but physical as well in a thousand small tiny ways.  Who in their right  minds would force a young girl to be in such pain from cramping fingers in far too tight gloves because she has “unladylike large hands”.  Really!  I know, the times were different, but it just galls me to read of people who would inflict such unnecessary pain on their own child.

When Ash and Evie meet… again, for she knew him the year before but with a different name attached to him – nothing is going to be the same, for either of them, ever again.  It’s not like a con man as good as Ash to get himself caught in his own trap, but Evie brought something fresh and new into his life.  And he wasn’t ready to lose that any time soon.

I adored this couple, perhaps for different reasons but they were unique separately and amazing together.  In Ash, Evie found the heady pleasure to be herself, break rules if she wanted and to have the freedom she never expected.  In Evie, Ash found the other part of his heart, the woman who would make him not only whole but a better man for loving her.

I enjoyed The Rebel Heir very much and would recommend it for any reader of Historical Romance – or any Romance for that matter, as it’s that good.  Now the wait for the next story in the Spare Heirs series.