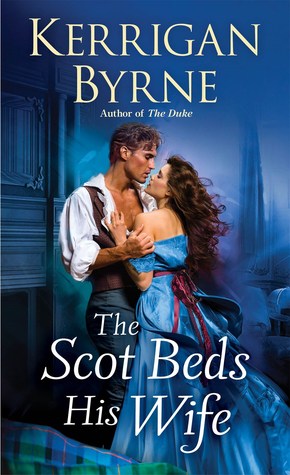 There came a point in the early parts of The Scot Beds His Wife that I had to walk away, grab a fresh cup of coffee and really think about Samantha and Gavin.  I’m glad I did that for when I returned to their story with a different mindset and a different set of “rules” for their behavior I found that I really enjoyed their story… secrets and lies included.  Sam is a completely unexpected character for an Historical Romance.  She is as different from the ladies of her time as can possibly exist.  She’s no simpering miss, she was from the American West, she can ride astride, out shoot anyone and can swear a blue streak that would put most sailors to shame.  She’s also harboring lies and secrets that we won’t know about until well into this story.  Gavin is a dark soul, his past, his reasoning might never make sense to the average person, but to him it’s his life.  He is also very much a man of this time period – so don’t expect subtle from Gavin.

Sometimes the most outrageous characters fit each other perfectly.  So in spite of their differences, Sam and Gavin work together very well.  There are so many layers to their story that to focus on just one part makes no sense.  It’s what they each bring to the relationship as a whole that matters in the end.  Yes, Sam is holding on to secrets, and they will cost her so much unless the man she’s come to love will see her differently.  There are twists and turns in The Scot Beds His Wife that I think you need to experience first hand.  Glancing over some of the reviews I would have to ask you, as a reader, to take a chance on a couple that might not fit into that “Victorian Historical Romance” mold… but once you’ve experienced their story you’ll find that you’re quite glad for their differences.

I enjoyed this story and would recommend it to any Historical Romance reader.  Sometimes you have to take a chance on a story, and this is one of those times.  I believe that you’ll discover a likable couple, interesting situations, some laughs, lots of steam and danger from several sides.