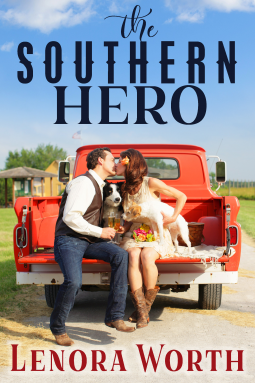 When reclusive war hero, Sam Hinson, is asked to be the best man for his friend Brodie Steven, he heads to the small town of Spirit, Louisiana, only to find out from the bride’s gorgeous older sister that he needs to deliver the “best man” speech at the wedding reception. He doesn’t like to even be in a crowd, let along speak to one.

Still hurting from her ex-husband, Madeline Sonnier Parker is ready for a little temporary romance. She tells Sam she’ll help him write his toast to the bride and groom if he’ll help her aggravate her ex-husband. But Sam’s been used before, and after being around Madeline, he decides he wants more than what she’s willing to give.

Their pact sets off a string of revealing old hurts and new fears as Sam and Madeline come together. But once they begin opening up to each other, they realize that this wedding bargain might just be the start to something more…

While Maddie is happy for her sister she’s less than pleased to learn that through the shenanigans of members of her family her ex-husband will be in attendance.  Even though they’ve divorced, and he’s moved on to a new marriage, Evan cannot and will not leave Maddie in the past.  His constant interference in her life, the irritating assumption that he still has a say in what she does and his unending need to meddle in her life.  He won’t let go, considering his former wife as still his property.  The fact that he will be here at the wedding has thrown Maddie for a loop and she’s gone off to be alone and let the tears flow.

Sam is a loner and quite happy to remain that way.  He’s been hurt and used in his past, and it’s left him rather cold and calculating.  While trying to comfort a crying woman, he discovers that she is the maid of honor to his best man.  Somehow it’s discovered that he has to deliver a toast which since he has no belief in love or happy ever afters will be difficult to write.  They come to a mutual plan – Maddie will write the toast and Sam will pretend to be with her and be a buffer against her former husband.  No one should get hurt, simply helping each other out over the hours of the wedding.  If only life were that simple.

The Southern Hero is a fun romance.  I could definitely feel for both Maddie and Sam, life hasn’t been exactly fair to either of them.  When they allowed the attraction between them blossom, it became a charming love story.  And I have to admit it was enjoyable to see certain people put in their place.

This title was published as Driftwood Hero at one time, so be sure that you haven’t read it under that title before you purchase.

If you’re looking for a fun, entertaining love story between two people who have a right to be a bit suspicious of love then this is a story you should have on your reading list.