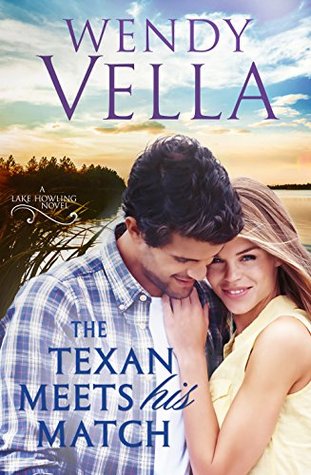 Annabelle Smith has never had it easy, but she’s a survivor. So when her brother cleans out her bank account, she reluctantly turns to the one man she’d vowed to stay away from.

Ethan Gelderman is a hot, sexy Texan, who has more numbers in his black book than most men have socks, and placing her trust in him is one of the hardest things she’s ever had to do.

Lake Howling is home to Ethan’s closest friends, and it’s also where Annabelle “firebrand” Smith lives. Sassy, beautiful and pricklier than a cactus, she’s never made it a secret that she wants nothing to do with him, but he sure as hell wants something to do with her. Lord knows, it’s going to be hard to earn her trust, but Ethan’s never backed down from a challenge yet, and he soon realizes trust is just the beginning of what he wants from Annabelle.

Read on for my thoughts on The Texan Meets His Match.  No true spoilers, promise.

“Assumed” is probably one of the most misused actions a human mind can take.  Annabelle assumed she knew all about what type of man Ethan was.  Rich, privileged, snotty and a true player.  In reality she couldn’t have been more wrong except about one thing – he was sinfully rich.  But not the wealth that comes handed down, the kind that a man works for, earns for himself and enjoys because it’s his. Yes, his family has money but also a tyrant of a father who is a nasty piece of work and Ethan got out as soon as he could.  He became his own man, made his own money his way and except for the occasional necessary visits home tried his best to forget his father even existed.

Annabelle’s brother is a drug addict, a gambler and an IT genius – he’s hacked into her bank accounts and wiped them clean of 25 thousand dollars.  Shortly after making this discovery Ethan overhears Annabelle’s phone conversation with her brother or at least parts of it that give him the knowledge that she’s in trouble.  Her snap, on the spot decision to sell her car tells Ethan just how desperate she is for cash.  He offers to go sell it for her, being a guy he’ll get a better price and because she is so distracted she agrees.  Another tip off since Annabelle would argue that the sky is pink if it meant getting in Ethan’s face about something.  Instead of selling the car, Ethan begins to show his true colors as he brings her back his own money without telling her.  Annabelle will refuse from this point onwards to even pickup a call or acknowledge a message from her brother, Cooper.

A few days later, in an attempt to get back to their he flirts, she sarcastically cuts him down relationship, Annabelle discovers an invitation to his sister’s wedding and discovers that he has no intention of returning home for that event.  Annabelle is at her bullying best to get answers out of Ethan as to why he won’t go home.  Finally he offers to go back only if she will go with him.  There in Ethan’s childhood home she will discover that money cannot buy everything and Ethan’s relationship with his family is truly terrible.  It gives her a better insight into the man he’s become and the attraction that she’s been fighting against since they first met begins to soften her towards Ethan.

The Texan Meets His Match is the second novel in the Lake Howling series.  If you’ve read the first story, then you are aware that Ethan and Annabelle bicker constantly, flirt and bicker seems to be their relationship.  Each fighting an attraction that simply won’t go away.  In this story Annabelle gets a chance to see the real man that Ethan is instead of her assumptions about him.  What she discovers will soften her heart a bit.  But she’ll never drop the edge, it’s just who she is.

There is romance, intrigue, danger and emotional confrontations in The Texan Meets His Match, as well as a lovely romance.  I would not hesitate to recommend this novel to those readers that enjoy a deeper story, a small town community of secondary characters and a lively romance.

« Forbidden by Elle Thorne
The Billionaire’s Deception by Mimi Wells »