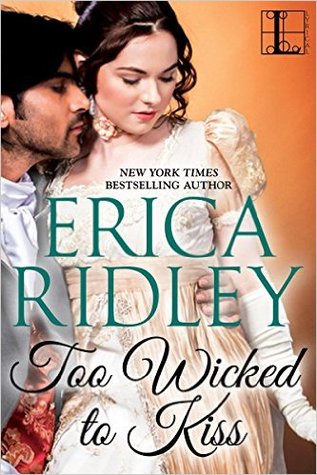 *Note:  Too Wicked To Kiss is a reissue of a title that was originally published in 2010.  Double check your memory before purchasing.  It’s a pet peeve of mine to end up buying a reissued title when I already have it on my bookshelf, just be aware.

Too Wicked To Kiss was an enjoyable Regency that wasn’t entirely an Historical Romance as you’ll also find bits of Paranormal, Mystery and even Gothic elements within this story.

Gavin is a handsome, brooding hero and Evangeline a lovely heroine who often has visions of people’s psst or future when she touches them.  Set in a truly Gothic-worthy manor it isn’t long before our couple are attracted to each other …in spite of Gavin’s dark broodiness.  Soon enough there is a murder at this grand party and immediately Evangeline has doubts about the man she is beginning to care for, after all there are those old rumors swirling about.

Ms Ridley has a way with words, she has always been able to draw me into a scene with her descriptions as though I was standing right there.  Too Wicked To Kiss was no different, in that I was transported to a very Gothic location with so many twists and turns for the hero and heroine to figure out before coming to their own personal happy ending.  For me this was a good story which got the 3 star rating.  It never defined itself as one genre or another to me.  While a touch of other genre will add spice to a story, this time I just wasn’t drawn in by the bits of Gothic, Mystery or Paranormal.  It was an enjoyable story that never defined itself enough for me to fall into this world and just get lost in the story.

Would I recommend this one?  Yes.  Simply know going in that you are getting a good story with twists and turns, as well as several genre tossed into the mix.  Nothing wrong with that, only if you’re looking for just a Regency Romance you’ll find a little bit more in Too Wicked To Kiss.

*I received an e-ARC of Too Wicked To Kiss from the publisher, Kensington Books – Lyrical Press and NetGalley in exchange for an honest review.  That does not change what I think of this novel.*

Available for the Kindle (another cover)

Tags: Erica Ridley, Scoundrels and Secrets #1, Too Wicked To Kiss

« Savage Urges by Suzanne Wright
See You At Sunset by V. K. Sykes »