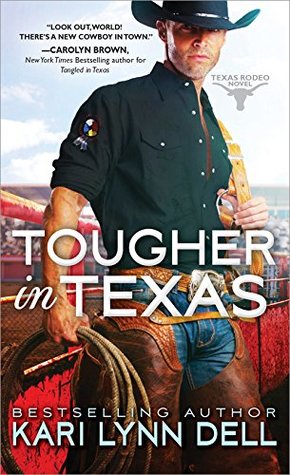 Rodeo producer Cole Jacobs has his hands full running Jacobs Livestock. He can’t afford to lose a single cowboy, so when cousin Violet offers to send along a more-than-capable replacement, he’s got no choice but to accept. He expects a grizzled Texas good ol’ boy.

He gets Shawnee Pickett.

Wild and outspoken, ruthlessly self-reliant, Shawnee’s not looking for anything but a good time. It doesn’t matter how quickly the tall, dark and quiet cowboy gets under her skin—Cole Jacobs deserves something real, and Shawnee can’t promise him forever. Life’s got a way of kicking her in the teeth, and she’s got her bags packed before tragedy can knock her down. Too bad Cole’s not the type to give up when the going gets tough…

Tougher in Texas is a unique romance that will capture your attention and your emotions very quickly.  I doubt this story will let go of your heart until the very ending… and even then it might linger on a bit.

Cole and Shawnee have known each other for years.  They are about as opposite in personality and routines as two people could possibly get.  Cole needs routine, he’s methodical, precise and his routines, schedules calm him, focus him – they are as necessary as breath to live.  Shawnee is brash, outspoken, lives by her own rules and will never ever settle down in one place for long.  She’s seen too much, she won’t wait for tragedy to touch her again because she’s outta there before anything can even think  of getting to her.  Right up until she encounters Cole again as a “pickup man” for the rodeo.  They’ve got one season to get through without tearing each other apart.  The more she’s around Cole the less she believes that’s going to be possible.  Because this man isn’t supposed to get to her, and she isn’t supposed to be thinking of staying and taking a risk.

I have to give Ms Dell a moment outside of this story.  You see, Cole has Asperger’s Syndrome, a type of autism.  There are thousands of people in the world today, some rather famous, who also have Asperger’s.  Usually they are highly intelligent people who don’t do well in social situations, especially without their routines as a calming agent.  Their minds are constantly moving, thinking, experiencing – it’s the getting those thoughts out in social interactions that is somewhat difficult.  In giving us Cole, all aspects of Cole, she’s given us a peek inside of an amazing mind, and one sexy cowboy.  I know people with Asperger’s, two who are close friends, and I’d like to believe that they’d approve of Cole’s portrayal in Tougher in Texas.  So I’d like to say thank you to Ms Dell for giving us reality, not everyone fits in the same silhouette… and wouldn’t it be boring if they did.

If you’re in the mood for a really good romance, one sexy cowboy and one hot-headed cowgirl – then Tougher in Texas should be on your reading radar.  I’d recommend this story and the entire series to any reader who simply loves a good romance.