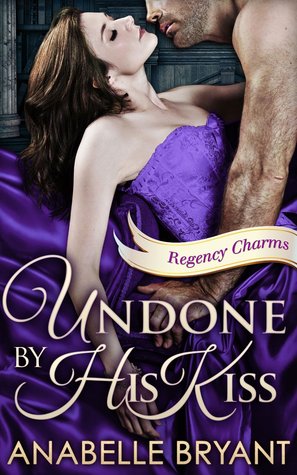 Experience has taught Emily Shaw that men are best avoided, so she’s determined to take her place in society alone and unrestrained by marriage. Renting a room in the heart of London, she establishes a Women’s League to promote equality between the sexes and teach women to be independent.

Jasper St David isn’t looking for distractions, but he’s fascinated by beautiful, fiercely opinionated Emily when she moves into the office above his. And when he learns of her determination never to succumb to male charms, he can’t help but see it as a challenge! After all, Jasper’s always found nothing more tantalising than the thrill of the chase..

Read on for my thoughts on Undone By His Kiss.  No true spoilers, promise.

A truly independent woman during the Regency Era was a rarity indeed.  Not that there were not women who longed for, fought for and eventually achieved independence – the mindset of the time was against them, and the battles were extremely hard fought.  But never doubt that there were ladies of every social level who wanted, worked toward and found their own independence on their own terms.  As a side thought – if it weren’t for our brave, stubborn and independent ancestors, where would we be today?  I shudder to think on that actually.

Emily has vowed to never love, never marry and to never, ever trust a member of the male species.  Her determination to live boldly in London on her own under no man’s control, to reach out and teach other women that they can achieve their own lives and success without a man attached to their hip was a future that Emily could embrace.

Jasper has set out to prove himself.  To his brother, of a certainty but also to his investors, society and perhaps most of all to himself.  While his brother may look down on his decision to enter “trade” and belittle him at every opportunity, Jasper is just as determined to become a successful independent man beyond his family’s place in society.  He has a brilliant, inventive mind, why in the world should he not use his talents to better himself and prosper financially?

Emily and Jasper may each seek independence in their own ways, but it certainly has set off sparks and disagreements between them.  Sharing spaces in the same building will bring them into each other’s paths often, and with interesting results.  Jasper has never been a man to back down from a challenge.  Emily has never desired a man enough to change her mind about the confusing creatures.  Put these two stubborn, intelligent, independence seeking people together and you will have fireworks of the most splendid explosions.

I enjoyed Undone By His Kiss tremendously.  And I have to admit that I enjoyed the secondary characters almost as much as the main couple.  There is a mystery here, as well as eccentric relatives, strong friendships and a love that will work hard to get beyond issues and events of the past in order to bring Jasper and Emily together.  And our couple have enough sparks going on between them to set a pile of fireworks ablaze.  Emily will discover that not every action of a man is a bid to strip away her own thoughts or her independence.  Jasper will find that what once was a challenge became a need that will not end until the stubborn woman he loves is at his side for a lifetime.

This is the second novel in Ms Bryant’s series, Regency Charms.  I adored the first, Defying the Earl, and I have no doubts at all that I will love the next novel in this series.  It is always an enjoyable touch to encounter characters from previous novels in a series.  For me, it ups the believability of the entire series, as no couple exists in a vacuum.  And a hint of who the next couple will be is also a winning point for me.  A series is a continuation of an overall arch that needs to include all of the characters, in some small way, to make it a true connecting series – to me.  That is just one of the reasons that I follow Ms Bryant’s series.  I get exactly what I’m looking for.. a believable story, endearing characters, a touch of mystery and a very, very good story.  What more can a reader ask for?

I have no hesitation in recommending Undone By His Kiss for any reader who enjoys Historicals, solid characters, an interesting story and a forever love.

Oh, have you been following the Blog Tour for Undone By His Kiss?  Keeper Bookshelf’s participation post will be up later this week.. but go and check it out, you’ll discover some amazing blogs along the way.

*I received an e-ARC of Undone By His Kiss from the publisher and NetGalley in exchange for an honest review. That does not change what I think of this novel.*

2 responses to “Undone By His Kiss by Anabelle Bryant”