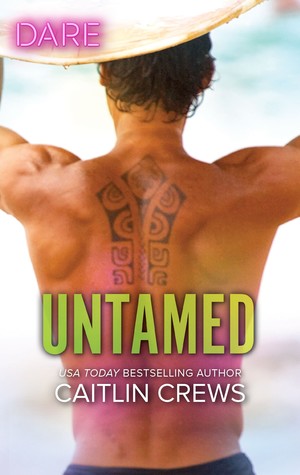 UNTAMED is a sexy, steamy romance between two extremely stubborn, determined people.  Jason simply wants to be left alone on his tropical island refuge – just goes to prove that money can’t buy everything, like isolation.  Lucinda is equally determined to crash his solitude, swoop in and grab the gold coin that the others, all men, have been denied – Jason’s island as the location to an exclusive hotel.

Neither expected the explosive heat between them.  And neither will back down from a dare.  Now it’s a matter of who will give in and give up first – and both are completely committed to that not being them.

There’s a lot I enjoyed about UNTAMED.  It’s definitely sexy and steamy but then I expect that from any book out of Harlequin Dare.  The chemistry between Lucinda and Jason was off the charts sexy.  I kept waiting though to get deeper into their personalities, to what made them tick the way they did – and that was longer than I expected to wait.

In all, I enjoyed UNTAMED, I have not yet read the earlier books and wasn’t a bit lost.  I will at some point go back to the beginning and get myself caught up.  If you enjoy a steamy, sexy romance then you’ll want to check this one out.