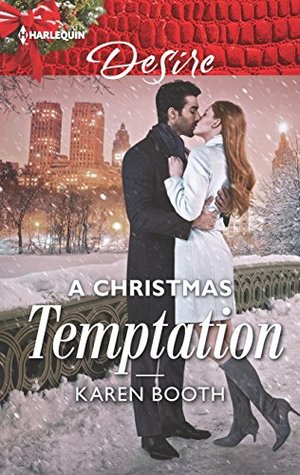 Sophie Eden refuses to sell her family’s legacy, especially not to Jake Wheeler. He and Sophie have a history—a night of passion that first left her elated, then heartbroken. Now the New York heiress wants him to stay away.

Titles in the Eden Empire series from Harlequin™  include:  A Christmas Temptation – A Cinderella Seduction  – A Bet with Benefits

*Update*:  If you loved Sophie and Jake’s story in A Christmas Temptation, and the “dropped shoe” at the ending had you desperately wanting to know more then I have an update for you.

There was a large gap between stories, actual real-life timewise, so you might be happy to know that A Cinderella Seduction is out the first week of July 2019.  I’m also reposting my review of the first story in the Eden Empire series as well to remind you of where we left off.

I’m really looking forward to the next story… how about you?

A Christmas Temptation begins what looks to be a fascinating series, The Eden Empire by Karen Booth.  Although, I have to admit that I was totally on Sophie’s side in this romance.  Jake struck me as a very frustrating man, one who is quick to make assumptions and slow to accept facts.  I wanted to reach into this story more than a few times and give him a stern talking to, plus a few deadly glares.  We love who we love, there is no logic involved and for Sophie Jake was her one, no matter my opinion of him.  If it’s true that we most often hurt the ones we really love – then Jake is completely smitten by Sophie since he’s hurt her time and time again.  To be frank, I never warmed up to Jake, even knowing his past and his reasons for his issues.  Sophie, I adored, often the underdog in the situation of trying to honor and continue her grandmother’s legacy, Sophie captured my emotions with her strength and determination.

I won’t give away spoilers, that’s not my way, but I will gladly recommend A Christmas Temptation to any reader who loves a good, solid romance, intriguing situations and a few puzzles to be worked out for the happy ending to take place.  Sophie and Jake’s story introduces us to some other interesting secondary characters, some who will have their story told later in this series.  With a few simple twists and turns, A Christmas Temptation has captured my curiosity and now I need to know how the entire story ends.