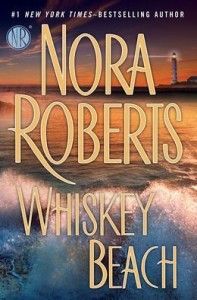 Abra has her own troubled past to deal with, yet seeing the destroyed man that Eli has become she slowly, determinedly sets out to help Eli find himself again.

Yet.  There is still a murderer out there, that so far has gotten away with the crime.  And when the break-ins start, Eli finds he has more than one puzzle to solve to save himself and his family home.

I wish I could say that I loved this novel.  I did not.  And that is the very first time in more years than I want to count of reading Nora Roberts’ works that I have said that.

It’s a good, basic story.  You have killers on the loose, a pirate treasure to be found, bad guys killing even badder guys and a detective that never gives up on bringing in the man he believes got away with murder.  Oh, and a redeeming love story as well.

So what’s not to enjoy?

I could just not care about Eli and Abra.  They never came “alive” for me, and that is at the heart of any story that captures me — they stayed words on the page and never brought life into their journey.

For me.  Perhaps others will find them a charming couple, with an intense lasting love that overcomes evil in the end.  I couldn’t find that – I wanted to, but it never happened.  For the very first time, I almost put the book down unfinished.  But I had to know if I was missing something.  In truth, I’m glad it was a library book that I borrowed and hadn’t bought it.

It is with deep regret that have to say – I didn’t like Whiskey Beach very much, even though it was written by my favorite author.  I just couldn’t fall into it.. and believe in it.

« Save Me From My Crazy Life!
Happy Book Lovers Day, Bookworms! »