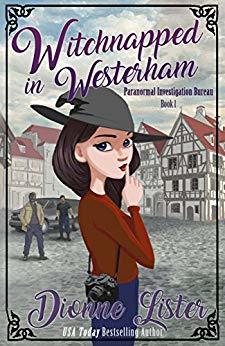 If you love a good Paranormal Cozy Mystery, a main character who combines sarcasm and snark perfectly… then you’ll love the beginning story in a new series by Dionne Lister, Witchnapped in Westerham.

Lily’s day goes from bad to worse in short order.  Her brother didn’t make his usual birthday phone call yesterday.  Well, he’s newly married and in the United Kingdom, so maybe she’d overlook that.  Dealing with a truly horrible bride during the photographing of her wedding was another treat.  Now there’s a stranger on  her doorstep saying her brother has been kidnapped… and oh, by the way, she and her brother are witches.  Yeah, quite an unusual 24 hour stretch there.  As Lily sets off for England to find her brother she’s got a lot of troubles ahead of her, the least of all is being accused of endangering her brother to begin with.  Lily’s life just got more interesting, more intense… and maybe now those special photographs of hers might come in  handy.

I enjoyed Witchnapped in Westerham.  It’s got snark, a mystery to solve, interesting characters and the perfect blend of mystery and paranormal that I enjoy in a Cozy Mystery.  I’m finding that I do have to get used to the “bad guy” being revealed to the reader earlier in a story than I’m used to, for that seems to be a new trend for many authors.  I’m okay with it, but in reality I do prefer the ending reveal personally.  I had fun with this beginning story and I’ll be keeping an eye out for the rest of the series.