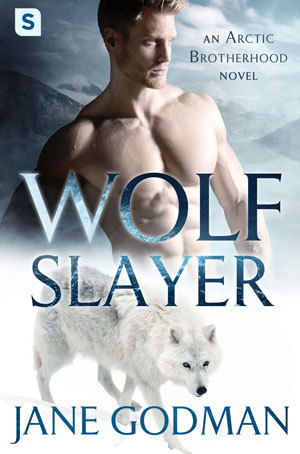 Just when I thought the Arctic Brotherhood series could not possibly get more intense — BOOM — along comes Wolf Slayer.  I usually try very hard not to announce a “favorite” book in a series in a review (it’s so unfair to the other stories)… but this one had me in it’s grip from the first page right up to the ending.  And then I wanted even more.  Wolf Slayer seamlessly blends bits of romance, mystery, paranormal, terror, suspense with enough twists and turns to equal a mountain trail.

As a shifter and a member of the Arctic Brotherhood, Kyle usually manages to keep his two worlds separate.  Yes, he’s a wolf and proud of it, but he also works in the human world on the police force – and if his suspicions are correct those two worlds are about to collide.  He is heading up a task force on the hunt for a serial killer, and it seems they’ve found the first still alive victim.  The information she could give them might possibly put an end to the madman’s killing spree.  What Kyle didn’t expect is to feel such a strong connection with this battered, abused, wounded woman.  Or to find his mate.

Maria has been tortured, kept in a cage for so long now she expects death at any moment.  When Kyle rescues her Maria cannot help her need to cling to him, to hold on to the only safety that she now knows.  There is a spark between them, more than just gratefulness for her rescue, yet this once proud, independent woman is now a victim of terror and fear.  She fighting back, in her own ways, only to discover that the Cage Killer is not done with her — and that she is so much more than she ever knew.

What an amazing journey Wolf Slayer is.  I would highly recommend this story to any reader who loves Paranormal Romance or Shifter Romance.  Kyle and Maria are a captivating couple, the danger level in this story is heart stopping, the sexy times off the chart.  I loved every moment spent in this world and now I’m waiting for the next stories.  With a strong lead in from this story, the next one should be quite amazing as well.  If you haven’t read the entire series yet, you can certainly still enjoy Wolf Slayer – but you’ll also want to go back to the beginning if this is your first read with the  Arctic Brotherhood.  All the stories are intriguing, sexy and well worth your time.