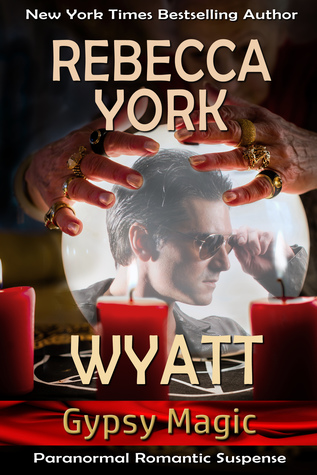 The old woman’s enemies had taken her most precious possession—her son, Carlo. He was lost to her now. Lost by trickery and deceit. But the three people who had cut out her heart would pay in kind. They would feel the pain she had felt. For they each had a son: Wyatt Boudreaux, Garner Rousseau, and Andrei Sobatka. Each would suffer a fate worse than death. A fate that would follow him till the end of his days.

An old murder case comes back to haunt Wyatt Boudreaux. Sent by his dad to make sure the gypsies don’t interfere with the conviction of Carlo Mustov, Wyatt runs into the woman he loved and lost, Alessandra King. She blames his father for Carlo’s conviction but she’s shocked to discover Wyatt is blind. Can they bury their differences and work together to find the real killer? And can the embers of passion smoldering between them flame to life again despite the gulf between their worlds?

Titles in the Gypsy Magic serial include:  Wyatt by Rebecca York – Garner by Ann Voss Peterson – Andrei – by Patricia Rosemoor

I’ll be blunt upfront.  I’m not a huge fan of serials, I do not like cliffhangers.  Hey, every reader has their own enjoyment levels.  Yet, recently there have been more of a different style of serial on the market.  Ones that end with a “happy for now” with an overarching thread that runs throughout all of the stories within the serial.  That type I can enjoy.  I need somewhat of an ending, at least to each part of a serial – and in the Gypsy Magic serial I’ve gotten that.  To get the entire scope of the story, as well as all the answers I’ll need to read all three parts.  That I can do, that’s more similar to a series and I’ve already admitted my series addiction.  So here we go:

One mystery, a gypsy’s curse, three men who will face her wrath and the three women who will stand by their men as they search for answers to a murder.  The true answers, not what everyone believes.

Wyatt and Alessandra’s romance is intense with a few surprises tossed in as they face each other once again.  The past wasn’t so far away that their reaction to each other was completely wiped out.  But stubborn people are well too stubborn for their own good.

Wyatt gets Gypsy Magic off to a great start.  Magic, murder, mystery and passion.  Quite the explosive combination, but I’ve come to expect the unexpected from Rebecca York.  Each story has it’s own happy for now ending and leads us into the next – which I’m about to go pick up now.  If you enjoy a good mystery with touches of the unusual, then Wyatt is right up your dark alley.